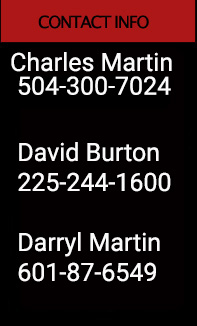 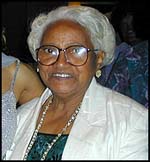 Born in Woodville, MS during the Roaring Twenties, Mary Lizzie was the eldest daughter of Narcissus Webb and William "Daddy Hoodlum" Martin. Perhaps the wild and outlandish times surrounding her birth were somehow assimilated all those years ago, because she is as feisty, lively, and animated as anyone nearing 84 could possibly be. Her journey to this place in her life has been characterized by caring and service, not only for her family, but for anyone, and everyone, who needs a helping hand.

She left the quiet life on the farm for the lights of the big city during WWII. Arriving in New Orleans she began working and has never really stopped. She met her first husband (Sammy Clark, Sr.) in 1951 while on a lunch break from her job at an uptown sandwich shop. The young couple contributed to the post-war baby boom with 3 children, first Sammy Jr in 1953, Kenneth followed a few years later, and, eventually, Linda.

She toiled to provide a safe, loving, and caring home for her children and tended to her ailing husband. She showed how big her heart was when she opened a nursery in the 1970's to provide a means for working mothers to have a safe, affordable place to bring their children during the day. She lost her husband to his dibiliating illness in 1974, but she persevered in making sure her children continued their education, and uphold the high ideals she and her husband taught them everyday by speech and by example.

In 1981 Mary Lizzie remarried, this time to one of the most unforgettable characters our family has ever seen. Isiah Summers brought with him a arger-than-life personality, amazing hair, and flashy suits. He also brought her much joy and happiness until his death in 2002.

It seems almost everyone knows "Miss Mary", as she is affectionately called by an amazing number of people in the New Orleans metropolitan area and beyond. Strategically placed bible tracts could be found all over the city, providing evidence of how far and wide she would travel to spread the Word. There was even one brief moment in time when she secured her driver's license. (What was the DMV thinking?) Unfortunately, there was the incident with a telephone pole, and a traffic jam that backed up all the way to Metairie which put a premature end to that level of mobility. Ah, what might have been.

Mary Lizzie is now the brightest light of the Kingsley House where she tends to the needs of other old people not nearly as young at heart as she. Discovered by the camera relatively late in life, she has been interviewed for a documentary and has appeared in commercials. She was even filmed for a small role on the USA television series "Memphis Beat".

We are certain that even if Hollywood comes calling again, Mary Lizzie will find the time to bring her wonderful smile, humor, and loving care to share with her adoring public at our Family Reunion in September.